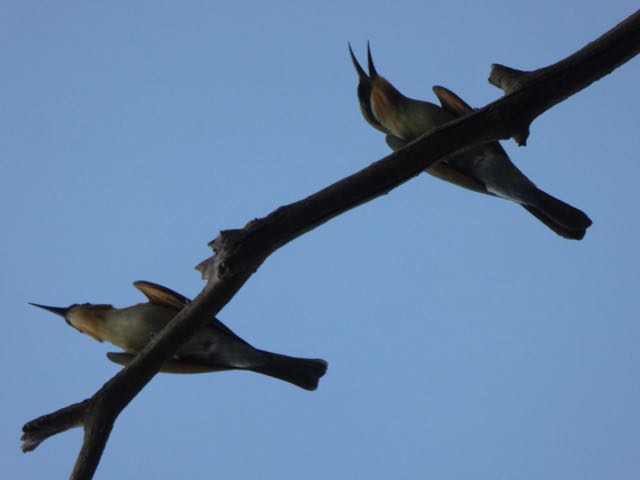 The sun shone through the rainbow bee-eater’s wings as they danced above, turning to emerald. I lay on my back, floating on the warm surface of the dam, the branches of the river red gums suspended in the furnace like heat above me. I beckoned the kids, they swam over then lay miraculously still,  in wonder or perhaps in a heat stupor, watching as the jewel like birds took turns swooping to the water only metres away.

A raven dropped from the sky, literally dropped, flat onto the ground. Climbing up the dust dry bank, I picked it up, cradling it into the water, but its heat stressed body collapsed, the heart ceasing its frantic beats as I held it, and laid it gently under a tree. Back in the water, I leant back in my husband’s arms, we were both suspended on an old tyre tube. It had been a hard week, hot, and the start of school, the arid zone throwing us challenges as it likes to do every so often. Isolation had been sinking it’s claws in.

I tried to store the beauty of this moment in all of my pores for later, for ever.  A sound grew
like a truck coming from the next dam. This time it wasn’t the goat shooter coming in for a swim. Trees over the far side flailed and bent, and the roar increased. All around us sat still as if broken in the heat, except above the distant trees, where a brown cloud grew, forming a spiral. The whirly whirly stretched up into the sky like Aladdin’s genie, roaring toward us in a narrow, weaving arc of chaos. A cloud of ravens kicked up all around it, as if being sucked into the air current, in what would have had to have been more of their last breaths. The kids screamed at the noise, the dust, the swarms of birds.

Then it passed, leaving us with the sound of a distant crash, something big in its path perhaps, then silence, heat again stifling all life. As I swam across the dam, back to the kids, I looked behind me to see the bee-eaters once again, they had returned to dance.